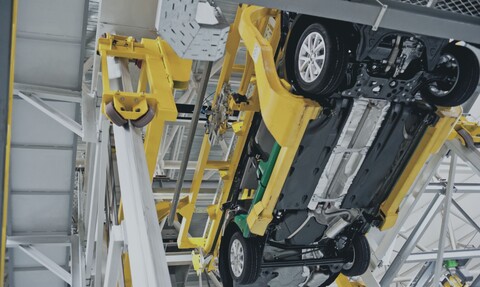 Successful conversion of a vehicle assembly with electric monorail system

A German car manufacturer approached VESCON Automation with the wish to convert & expand an existing car assembly line with an electric monorail system. The challenges that arose during the course of the project and how they were overcome are reported by the departments involved. The end result was a system with brilliant production performance.

A German car manufacturer approached VESCON Automation with the request to convert an existing car final assembly and to expand the load capacity of the electric monorail system. The challenges that arose during the course of the project and how they were mastered are reported by our specialist departments involved. The end result was a system with brilliant production performance.

But what was actually to be done?

For a German car manufacturer, an existing final assembly line for passenger cars was to be rebuilt and the load capacity expanded in order to be able to produce further vehicle types (e-mobility) in the future. The conversion involved these three areas:

After the so-called marriage, where body and chassis are joined together, a conveyor belt takes over the body. The cross members to which the vehicle is attached are no longer needed. They are therefore dismantled and transported back. On the conveyor belt, the vehicle is then prepared for attachment to the heavy-duty EMS. The vehicle then hangs in the EMS for the final assembly of further parts (are mounted from below).

Each EMS chassis can carry a load of 2.6 tonnes when converted. There are a total of 95 hangers and each trolley has its own control system. The big advantage: each trolley can be maintained individually. This means that individual trolleys can be taken out of the train so that the EHB can work without interruption at any time.

The EMS is one of the established in-plant and floor-free transport systems. Particularly in final vehicle assembly, EMSs are preferred because the employees have barrier-free access to the lower area of the vehicles.

What challenges were encountered and how were they dealt with?

This was a highly challenging project, both technically and in terms of deadlines. It could only be completed within a narrow time frame because the production could only be shut down for a certain period of time for cost reasons. In addition, limited space made project execution difficult. Another challenge: the project was implemented during the height of the Corona pandemic and related Corona requirements influenced the implementation.

Our Virtual Commissioning, Hardware Design and PLC Programming with Commissioning departments worked closely together to successfully implement the project.

To shorten the on-site commissioning time, the existing plant was converted into a virtual model. Specifically, the hardware and the entire PLC programming were imported and subsequently simulated. This meant that it was not necessary to wait until on site to find out:

From a software point of view, this was probably the biggest project ever for VESCON Automation. There were the following challenges in programming:

On site, all parts were first commissioned in another hall, connectors pre-installed and all cables attached. Only then was everything assembled in the actual production hall. Another important point, so that the conversion could take place in the previously defined time window and production in the existing EMS did not come to a standstill for too long.

"Without the great team that worked on the project in this constellation and without the untiring personal commitment of each individual, it would not have been possible to realise this project! But this is how we managed to have the plant running so stably (heavy-duty EMS and upstream conveyor belt) in just the first 2 days after the expansion that all production targets were exceeded. I have never experienced that up to this point."

The customer now has a plant for final car assembly that is now fit and running robustly for the next few years and the team has another successfully completed project whose implementation has welded them together.

Learn more about the automation services.