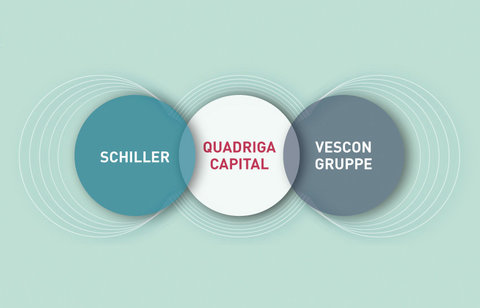 Cooperation with perspective: VESCON and Schiller move towards a joint future.

Exciting News from Frankenthal: As of December 1st, 2018, VESCON and Schiller have joint their competencies in a holding company. At the same time, the investment company Quadriga Capital has come on board as the majority shareholder.

Exciting News from Frankenthal: As of December 1st, 2018, VESCON and Schiller have joint their competencies in a holding company. At the same time, the investment company Quadriga Capital has come on board as the majority shareholder.

For VESCON this merger is a decisive step, which established the basis for its continuous growth. The merger also has a significant strategic importance for Schiller. “VESCON and Schiller complement each other perfectly,” says VESCON CFO Peter Bürger. “Both companies are in a similar growth spurt and will benefit from this merger in numerous ways, while the range of the service portfolios is mainly complimentary. This results in some overlap but also leads to many additions and expansions, which in the future can and will provide even greater resources and services for our customers.”

With more than 200 employees, the Schiller Automatisierungstechnik GmbH and the Schiller Engineering & Maschinenbau GmbH, both headquartered in Osterhofen, are successfully active in the fields of Automation, Intralogistics and Clean Room technology. At five locations, including a site in Shenyang, China, the company develops standard-setting systems, machines and integrated solutions. One of the most important innovations that Schiller has developed is the Autonomous Tugger Train, which has great potential as an intralogistical solution of the future. “Together with VESCON we are growing to a size which gives us entrepreneurial security for future development of our products and innovation. At the same time we can expect synergy effects from which both companies will benefit”, the founder and Managing Director of Schiller, Ewald Schiller, summarizes the advantages of the merger.

In order to formally justify the joint venture, VESCON and Schiller have established a holding company and at the same time opened themselves up to the Quadriga Capital GmbH, headquartered in Frankfurt, as majority shareholder. Quadriga Capital not only strengthens the financial side but also brings extensive know-how from the Automation Industry to the table: “We are pleased that we could gain a strong partner with Quadriga Capital, who would like to promote the successful development of our companies, while representing the entrepreneurial values that we endorse. Quadriga will endorse us in expanding our growth strategy sustainably,” says VESCON Managing Director Dietmar Haubenhofer.

In addition to these steps, the management itself has also been strengthened. Since December 1st, 2018, Michael Goepfarth, together with the previous Managing Directors Peter Bürger and Dietmas Haubenhofer, leads the newly formed conglomerate. Michael Goepfarth has many years of experience as CEO and Managing Director at technology-driven industrial companies: “I am very much looking forward to the challenges and opportunities that lie ahead of me, and I have great respect for what has been achieved so far. I am convinced that we will continue to expand our position within the market, we have a clear vision: With Schiller and Quadriga Capital we want to build a leading medium-sized platform for Industrial Automation and other Engineering services together.”

With this newly established course, VESCON has set itself up for a promising future. During the upcoming year, Peter Bürger’s long-awaited switch into the advisory board of the holding company will be completed: “I will continue to be available to the company on the advisory board and will help advance our joint vision.”

The aforementioned transactions are still subject to approval by the responsible antitrust authorities.

With the unification of Schiller Automatisierungstechnik, Schiller Engineering & Maschinenbau and the VESCON Group, the new conglomerate now has more than 700 employees at 16 locations in four European countries and in the People’s Republic of China. Among its customers, who we support in the fields of Automation, Intralogistics, Process, Special Machinery, Energy and Software, are medium-sized companies as well as international corporations. One important focal point is on the area of Automation for automotive customers, which not only include automotive manufacturers but also their suppliers. The turnover of the entire conglomerate is estimated to amount more than 100 million Euros.